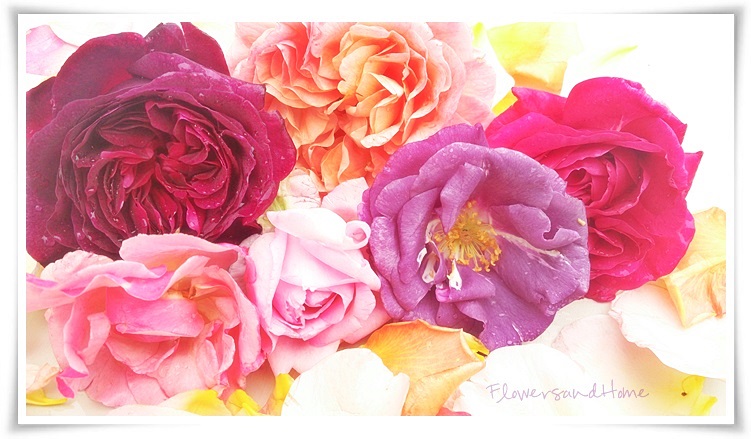 I remember my previous post from a few days ago where I started by saying there was a gentle rain outside. That rain didn't stay that gentle though and since then it almost hasn't stopped raining, on the contrary, yesterday was the worst with a lot of heavy rainfall. The rain was accompanied by a lot of wind as well and that collaboration between the two led to a terrace full of rose petals and some flowers that broke off and were scattered all over the place. 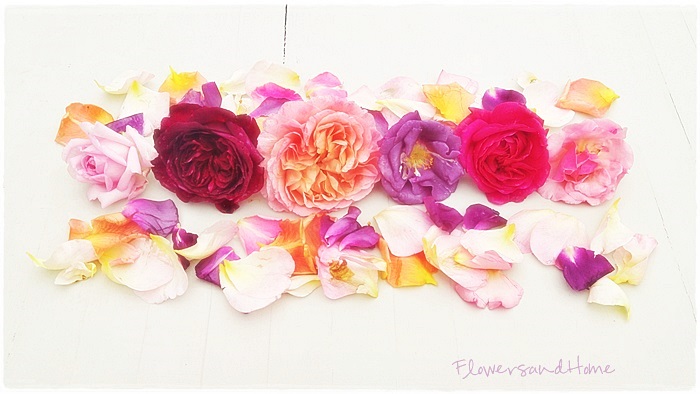 I couldn't just let those roses lay there or throw them away, so I picked them up and when the rain stopped for a while, I gathered some of the rose petals lying around and decided to make a little arrangement on the garden table and photograph it. I normally post the pictures I take with my phone only on IG but this is an exception. My camera was unavailable since my daughter needed it this week for a school assignment. I enjoyed taking these pictures and hope you also enjoy this little bit of brightness I gathered on this otherwise gloomy day. The roses on these pictures are, clockwise from from top left,
Minerva, Marie Curie, Ascot, Wife of Bath, Rhapsody in Blue, Leersum 700 and Munstead Wood. 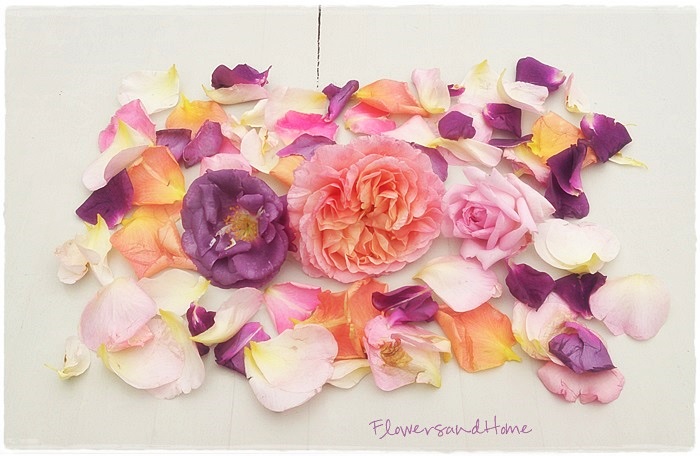 Although maybe a little red really makes the colours pop. 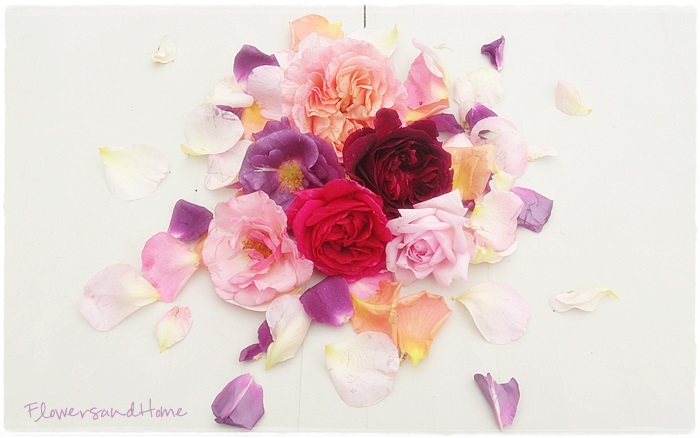 The dark red of Munstead Wood is so hard to combine and to photograph well
but it's such a pretty rose, the very first rose I ever bought. 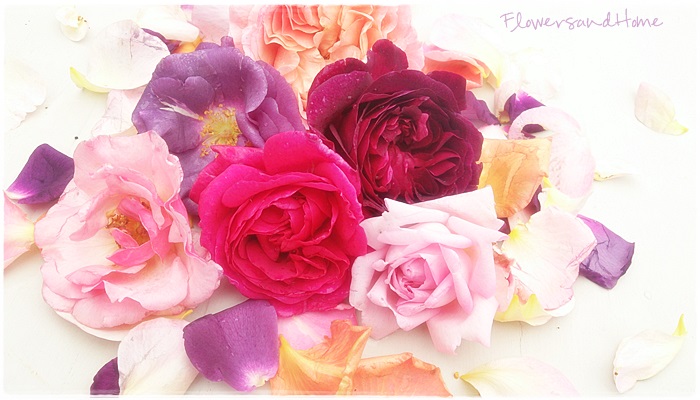 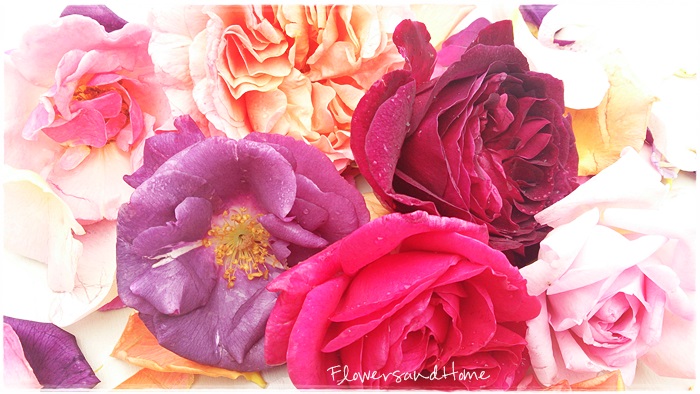 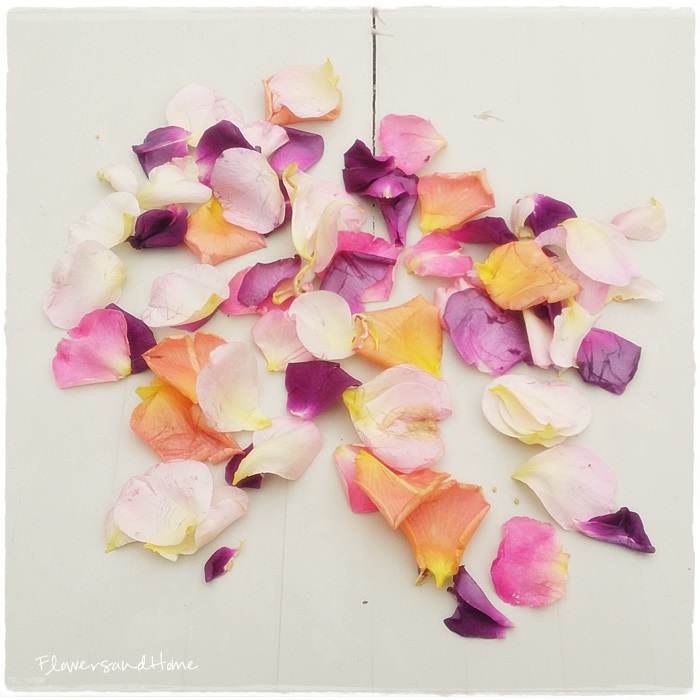 Petals in the picture! The orange petals are from rose Ashram.
It completely fell apart as I picked it up, so I could only use the petals. 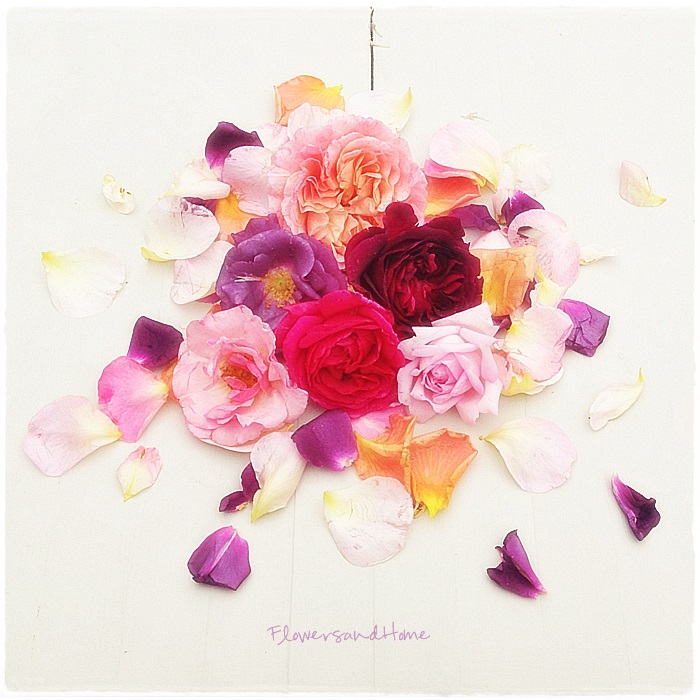 The end of a bit of fun with rain battered roses.
Hope you enjoyed it.

A hello from the May Spring garden

While finishing this post, I see the rain gently falling down outside and I don't mind, not after the beautiful sunshiny day we got yesterday. Sun, a gentle wind, ideal for drying the laundry outside and for taking some pictures in the garden which I both did and this time, instead of letting the pictures sit on the memorycard for too long and forgetting all about them until it was too late to use them in a blogpost, I decided to share them immediately. So here we go.


Some of you who follow me on instagram may already know we had to take the large willow trees in our garden down last winter as they had become too large for our little garden and also dangerous with several larger branches breaking during some of last summer's storms. Those large trees were such a determining feature of our garden, it took some getting used to them gone. Even taking photographs needed some adaptation to the new situation. My nice green and sometimes dark background has disappeared, instead there's the neighbours high hedge now on one side and the old wall and lots of roofs on the other side. But I try to adapt and whatever the situation is I love to take photographs and make the most of it with what there is. Different angles, different settings, love to play with it. My photos may be a bit lighter and brighter due to the new situation, yes, lots more light in the garden now which is great actually, but I hope you love this stroll in our garden nevertheless. It also seems as if the garden itself had to get used to the new situation. While some plants have completely disappeared, others appear just like that out of nowhere it seems. And then of course there is the container garden with also some new additions and changes. There are some perennials I'm trying out in containers like the Campanula beneath that just started flowering. 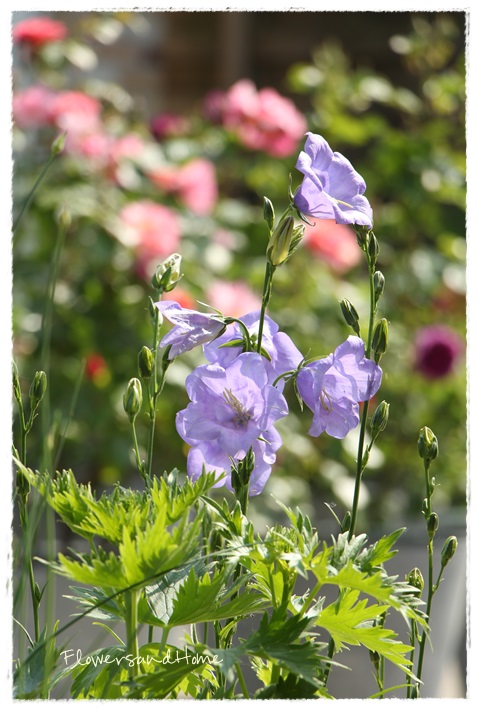 The white Delphinium is a survivor in container from last year.
It didn't really blooms that much then but obviously
doesn't mind being grown in a container as long as it's taken care of of course. 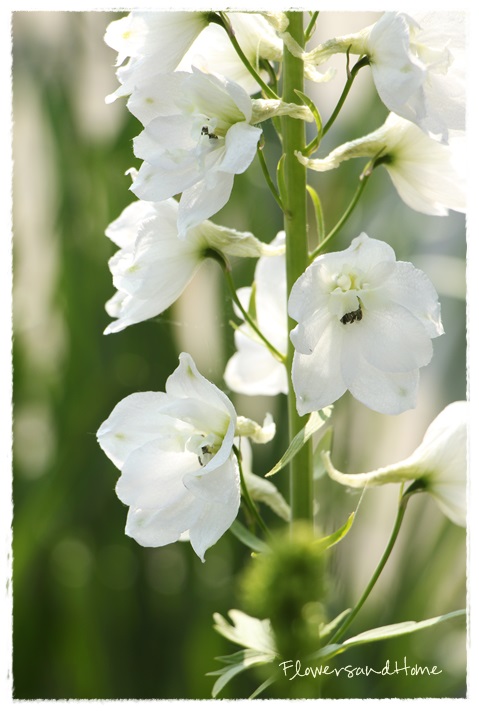 This is the first stem of the white Delphinium blooming.
Happy with these white flowers, especially since the white blooming Echinacea
I grew in container for some years and of which the flowers have been on the
header of this blog for a very long time now, hasn't come back this year. 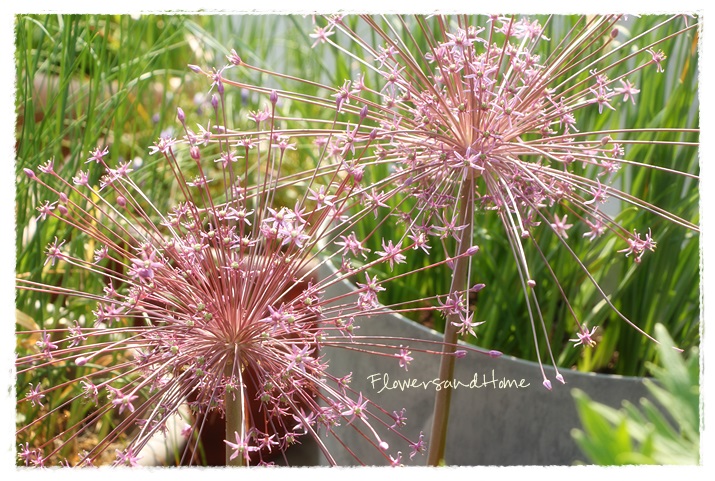 From the bulbs I planted in October the Alliums are the very last to bloom.
The pansies I planted on top of the bulbs have faded by now and I removed the dried up plants yesterday. The foliage from Alliums starts to wilt even before the plants start to bloom so I didn't want that on the photo either. And so here I am, trying to get a nice picture of these huge Allium Schubertii that stand in the middle of the container garden. It isn't all that self-evident but I tried to get them on photo and show them off from their prettiest side because that is what they are really, a true show stopper! I planted three bulbs of which two survived which is just great, three would probably have been even harder to get on photo in a good way. 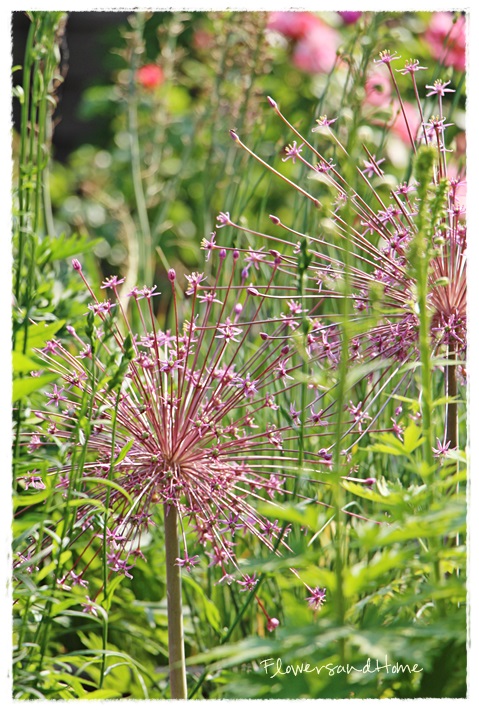 Here are the same Allium again but seen through the Delphinium stems
that stand next to them, creating the illusion of a bit of a lush garden I thought,
while in fact it's just some pots standing next to eachother.
In the background you see the different shades of pink from
the roses in containers that started blooming as well. 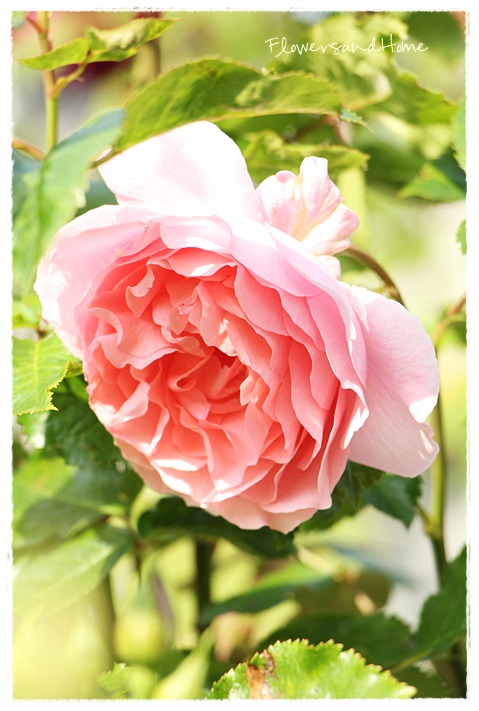 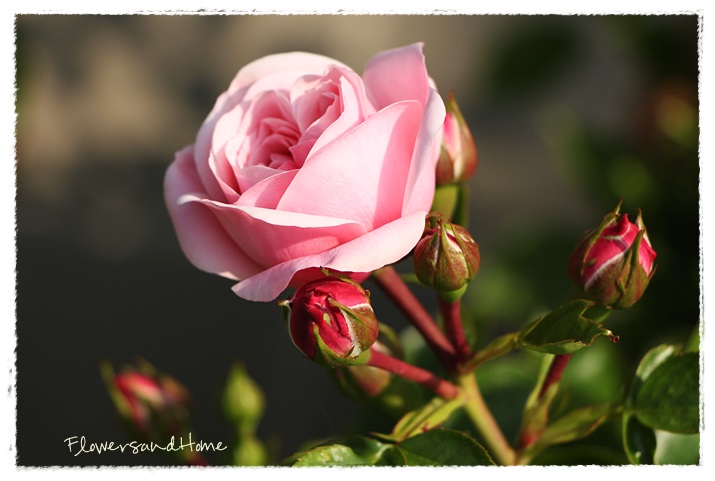 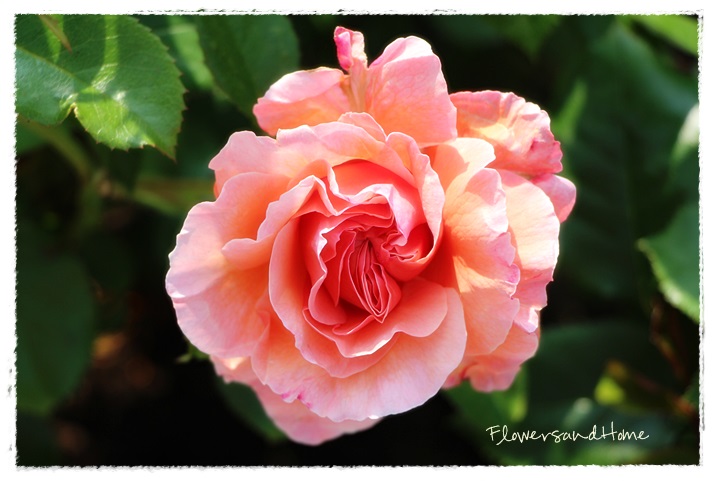 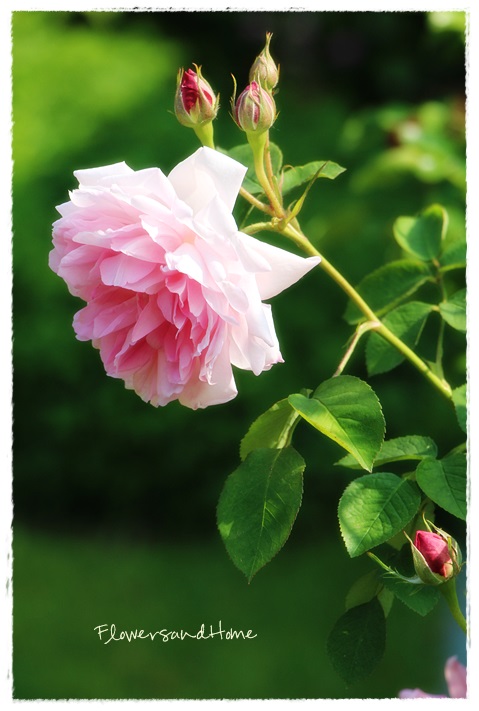 Another Allium I love and you can even enjoy long after it's done blooming once it's dried
is Allium Christophii. I already mentioned it last year in this post. 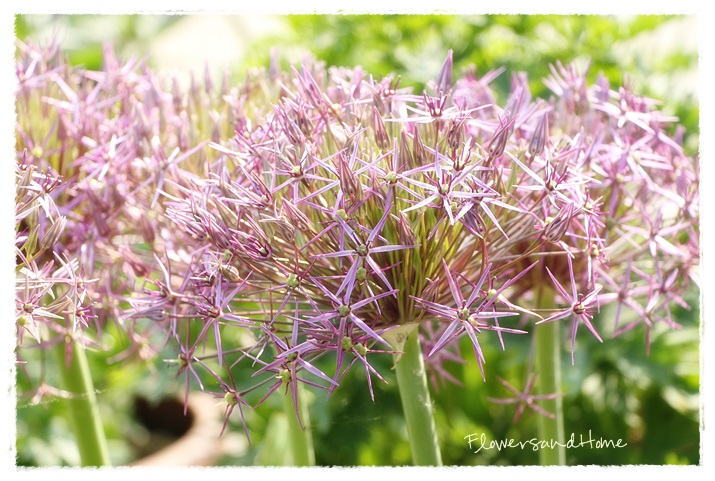 The many star shaped flowers haven't all opened up yet but by the time they do,
they will form a sphere of purple stars around the stem.
That of course is the case with every Allium, large or small
and amazingly enough one of those smaller Alliums appeared in the garden this year.
Must be from one of the bulbs I planted years ago, never leading to much more
than some foliage then but this year, in the middle of a Hydrangea bush, there it is,
one perfect purple Allium, can you believe it! 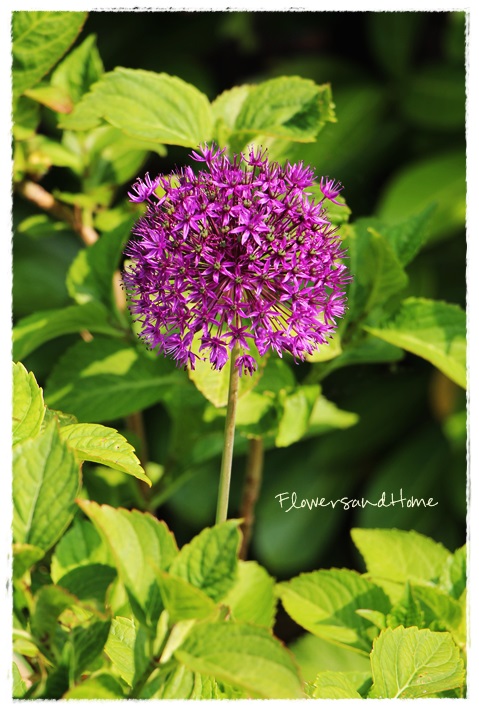 Talking about surprises in the garden, these lovely white diasies
all of a sudden decided to join us as well. 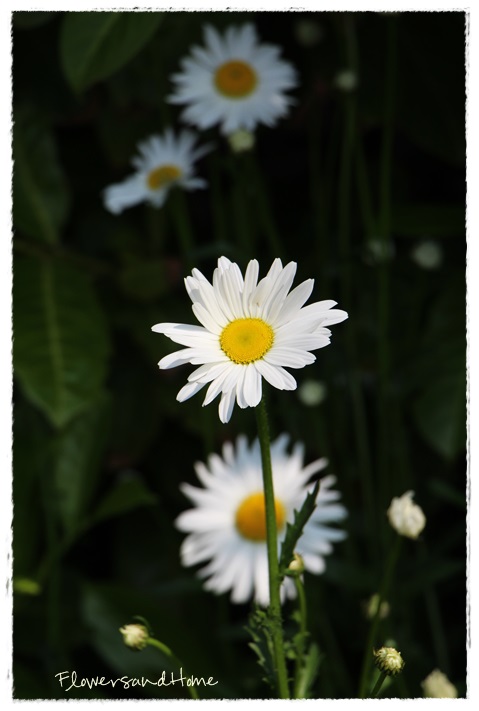 They may not be in the spot I'd like them to be but since the garden is a bit of
a wilderness right now, I'm glad they're there and I'm already wondering whether
I will be able to collect seeds from them later on and then sow them and plant them
in other places in the garden. It's such a simple flower but I love it! 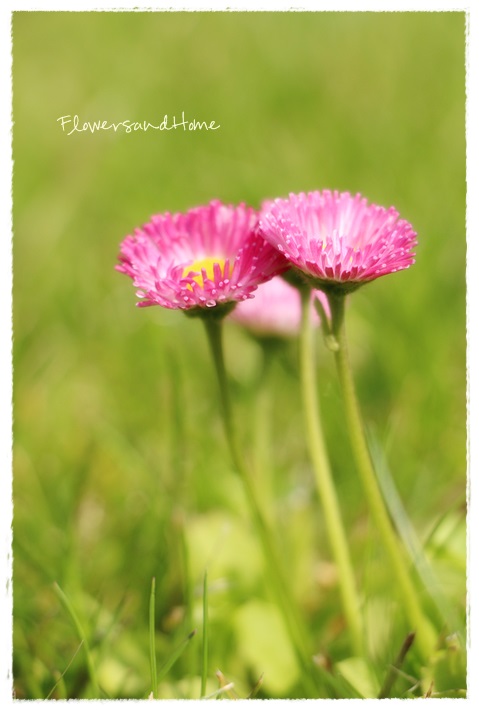 Even the smaller ones that keep popping up in the grass.
They're such happy little flowers! 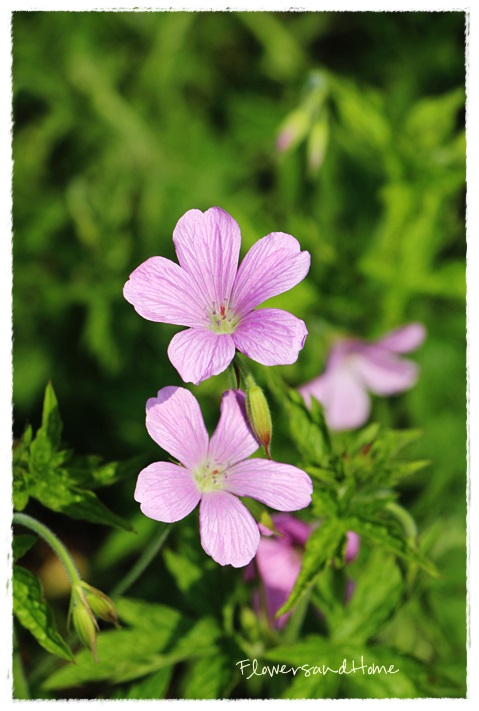 More little happy flowers in the border with these Geranium Endressii
that are just starting to bloom, now covering the border in little pink dots. 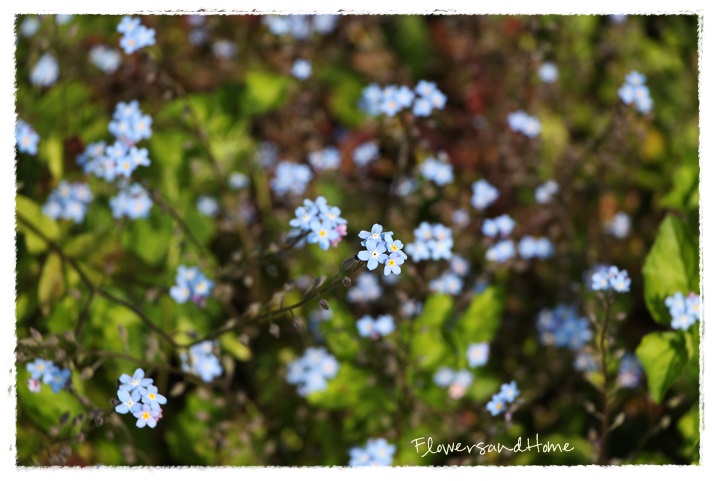 But these must be the champions of little flowers, adored by everyone,
little blue forget-me-nots. Always love it when these turn up somewhere,
never in the same place, they love to travel around and I don't mind. 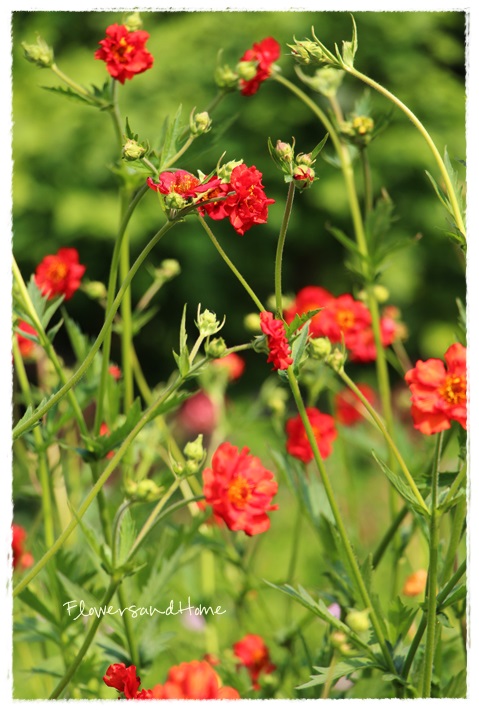 And that brings us back to the container garden where
Geum Mrs Bradshaw is really putting on a show this year!
Little red flowers dancing on long stems. 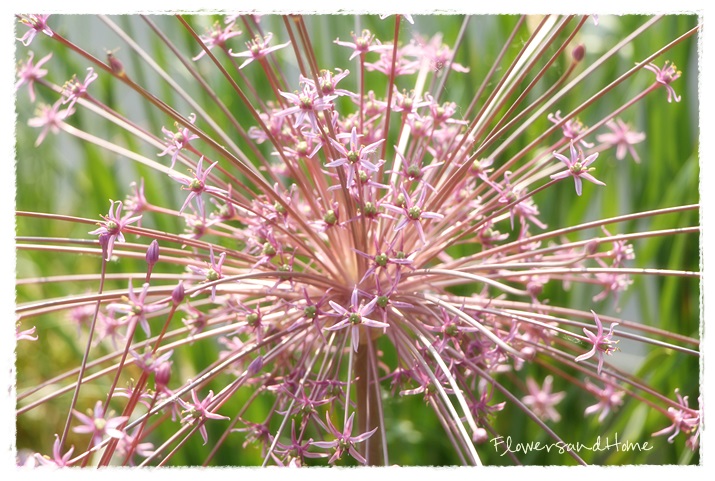 One huge flower made up of again little flowers on long stems. Back to the Alliums. 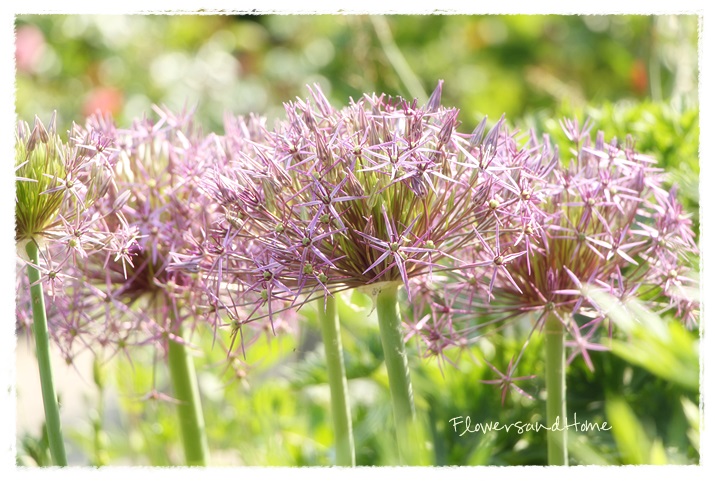 With this cloud of purple flowers I want to end this stroll through our garden and wish you all
a wonderful new week to come.

If you're on IG, let me know or pay a visit to my account, happy to meet you there as well.
All pictures I post up there are taken with my smartphone. I love it when you leave a comment,
here on my blog or on instagram because, honestly, who doesn't love that?! ;)